Field-proven hydration and recovery. For use during and immediately after exercise.

Made with everything your dog loves.

Mix with water and feed as a snack or with a meal. 1 level scoop is approximately 1 oz of Revive.

During exercise: Feed Revive to dogs during prolonged exercise in small doses, at regular intervals starting after the first hour of exercise.

2 to 4 hours after exercise: Feed a mix of ½ to 1 oz. Revive plus their daily allowance of Genesis and kibble.

Revive is not recommended for use on fully rested dogs prior to exercise.

Revive is a scientifically formulated, cutting edge nutraceutical energy replacement supplement designed for dogs whose body systems have been depleted due to physical activity, dehydration or rehabilitation.

Revive offers state-of-the-art, replenishing nutrition that acts fast to support many body systems simultaneously. It offers rapid recovery to get your dog back on track.

How does it work?

Revive is a scientifically formulated, cutting edge nutraceutical energy replacement supplement designed for dogs whose body systems have been depleted due to physical activity, dehydration…

We formulated Revive with new technology that offers state-of-the-art benefits. Compared to the conventional maltodextrin supplements, ours is 35% more effective. First off, we used the highest rated energy source, with the greatest Glucose Equivalent (GE) rating on the market.

The higher the GE rating, the more efficient the utilization of energy by the muscles. A proper match of high GE energy to muscle cell osmolality is critical for optimum use of the energy source, and minimal production of insulin in the body.

If you were to use a poorer quality energy source, the body must produce a higher insulin level for an extended period of time. This results in a quick surge of performance, only to be followed by a depressed performance known as a carbo crash, while the body tries to restabilize.

Remember eating all of your Halloween candy in one sitting when you were young? Maybe your parents were wise enough to stop you. If not, you’ll recall the sugar high followed by the crash.

It doesn’t feel great. Let’s not take our dog on that route either. Revive’s formula starts with the very best energy source to help avoid carbo crash and to keep your dog performing at the highest level all day long.

We formulated Revive with new technology that offers state-of-the-art benefits. Compared to the conventional maltodextrin supplements, ours is 35% more effective. First off, we used…

The good stuff: in the right place, at the right time.

The second key aspect of Revive is its ability to deliver those high GE energy sources to your dog in a controlled absorption manner. We want just the right amount at just the right rate.

Research has shown that the high GE energy sources that we use in Revive are much more efficiently delivered to the body when fed along with certain key nutrients.

Our scientific formulation provides the critical nutrients needed for this “controlled absorption” of energy sources to the muscle. These nutrients help with sustained performance, while avoiding carbo crash. This method represents a major breakthrough in dietary support to canines for both during and after exercise.

Offering Reveive during physical exercise to reduce the depletion of glycogen from your dog’s muscle reserves, and also within 30 minutes after exercise, will speed muscle recovery and aid the muscles’ glycogen reserves.

Now that we have the most effective energy source, and the nutrients that control the absorption and avoid performance crash, let’s talk about the other added features of Revive that our competitors would never offer. Digestive Support.

The good stuff: in the right place, at the right time. The second key aspect of Revive is its ability to deliver those high GE…

While you dog is catching a frisbee like a machine or retrieving a ball for the 3000th time, other things are happening within the body. Specifically, in the gut. Nobody mentions it, but we’re here to make sure no detail is overlooked when it comes to your dog’s health.

During physical activity, the digestive track is taxed or compromised. We wanted to aid digestion during these difficult times, so we started by using compounds that support intestinal tissue and the intestinal villi.

The villi are the tiny finger-like structures in the small intestine that absorb nutrients. We added a highly effective package of guaranteed live bugs, commonly referred to as probiotics, at an appropriate level of 95,000,000 CFU’s per 1 oz. of Revive.

What are CFU’s exactly? They’re Colony Forming Units, and it’s how the industry measures probiotics. These are a beneficial, viable digestive bacteria that help maintain healthy microflora for a stable gut environment.

Then, we included both pathogen binders and toxin binders. These binders absorb or lock on and prevent harmful toxins or pathogens from spreading or affecting the gut as they leave the body. These natural B-1-3 glucan binders are very effective and fast-acting, which can prevent your dog from being sidelined from a day of play.

Next, we added acidifiers to help maintain proper pH in the gut. These acidifiers are specifically designed to adjust to the proper pH—rather than hoping the microflora will get the job done. We included all of these features to help during stressful exercise, and to help keep the digestive tract working to its fullest potential.

But we didn’t stop there. Next, we’ll discuss Immune Modulators.

Help where it’s needed. While you dog is catching a frisbee like a machine or retrieving a ball for the 3000th time, other things are…

Don’t let anything sneak in and ruin the fun.

The immune system can be compromised in many ways, such as through poor diet, stress over vaccination, the use of antibiotics, physical overwork and toxemia. When the immune system becomes compromised, antibody function is reduced, putting all other body systems at risk. Let’s not go there.

When your dog is under stress, there is a natural elevation in stress hormones. These are commonly known as the fight or flight hormones. You probably learned about that in elementary school.

The fight or flight hormones, adrenaline and cortisol, are designed to go up during these times of stress and then return to normal levels or a resting state. Now, if these hormones stay elevated for an extended period of time, the adrenal glands can become exhausted.

Remember that cortisol that we just mentioned? One key function of cortisol is to shut down non-essential body functions when stress is significant or prolonged. These non-essential functions include the immune system, digestion, appetite, and circulation to the skin. Cortisol allows the body to route energy to more immediate survival functions.

We want your dog to avoid this altogether. To do this, we included what are called immune modulators in Revive. In fact, we added several of them. Now, let’s not confuse an immune modulator with an immune stimulant. Immune stimulants, like Echinacea, can only be taken for very short periods of time because they will exhaust adrenal glands and that’s what we want to avoid.

Documented research shows that the immune modulators we used in Revive improve microphage production and increase Plasma igG and bile igA levels by 25%. This boils down to helping reduce the risks of illnesses during stressful conditions by supporting your dog’s immune function.

Don’t let anything sneak in and ruin the fun. It’s important to understand that your dog’s immune system is critical to both short- and long-term…

Premium ingredients, down to the vitamins.

Because active dogs require specialized vitamins and antioxidants, we loaded Revive with the finest of their kind.

We started with Vitamin C. Vitamin C is used to boost the immune system, promote healing and fight off illness and remove waste from cell membranes. Conventional, non-stabilized forms of vitamin C function in the body for a short amount of time, which is roughly 4 hours.

We also provide high levels of vitamin E in Revive. Vitamin E is know as an extremely effective antioxidant that directly supports immune function and helps reduce the risk of immune collapse in active dogs. Vitamin E is also very effective at removing waste from stressed tissue such as skeletal and organ muscles.

High levels of B vitamins are also used in Revive to promote appetite and support proper liver function. The liver is critically needed during physical activity because it transfers glucose and energy sources from the diet into the tissue stores of glycogen. Let’s break that process down a bit.

When the muscles need energy, the liver converts energy from the diet, and from glycogen, to feed the hard working muscles in your dog. The liver is also critical for protein/peptide/amino acid transfer in the body.

Last but not least we included the ultra-antioxidant, Astaxanthin. Wow, that is a scary word. Let’s break down to see what it is and what it does.

Astaxanthin is a fat-soluble nutrient that has a very unique molecular structure that makes it such a superior antioxidant. It cleans out free radicals, or waste, from cells in your dog’s body. It is an all-natural material that is found in microalgae grown on the Kona coast of Hawaii. The extract is the most highly concentrated form available, compared to other sources of Astaxanthin.

Microalgae contains over three times the concentration of traditional sources such as Salmon and Crustaceans. Astaxanthin is known to protect cells from free radical oxidation, enhance immune support, improve health and longevity and improve breeding. Astaxanthin is so strong that is has been proven to be 500 times stronger than vitamin E and 2,000 times stronger than vitamin C as an antioxidant. With powerful properties like these, we had to include it in Revive.

Premium ingredients, down to the vitamins. Because active dogs require specialized vitamins and antioxidants, we loaded Revive with the finest of their kind. We started…

Far beyond any flavoring.

There are two basic issue to consider when addressing the appetite of physically active canines.

The second challenge is to provide a supplement that is high in palatability. We find the majority of dogs drink it consistently when added to plain water. Win-win.

Far beyond any flavoring. There are two basic issue to consider when addressing the appetite of physically active canines. The first challenge is to maintain… 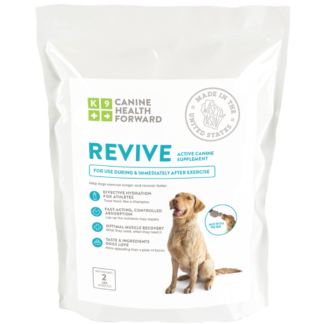