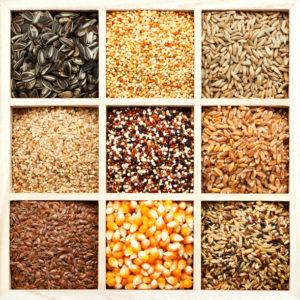 As the pet food market has fallen head over heels in the past several years with the Grain free fad, conversations all over the map are going on about whether or not grain free is better.  It is a topic that requires thorough education to reach an  accurate verdict.  Grain included diets are applauded by some people,  from owners who love these foods to professionals that suggest that some  grains are fine and should be a natural part of a balanced dog diet.  In another corner  those that prefer grain-free, suggest that grain free formulas are more natural, more like the ancestral diet of dogs.  They make the point that dogs are carnivores and any plant-based portion of the diet should be limited.  Yet, in another well represented corner, are those people (usually experts) that maintain that grain free dog food formulas were developed solely because consumers made demands on the dog food manufacturers to solve problems that didn’t necessarily exist.  All have valid points so let’s look at a few highly debated topics.

Legumes found in grain free diets are better for canines.

Examples of these Legumes that we commonly see making up the majority of the replacements of grains in the Grain Free diets can be beneficial yet pose a threat to the overall formula that they reside in.  These legumes are extremely high in protein which allows the manufacturer to use a much lower grade of meat protein sources, the sources we know canines are meant to consume.  Often times the first three to five ingredients in these grain free diets contain a number of legumes to boost the protein without using expensive animal based protein sources.  Just the opposite of what your dog is designed to consume and digest.

My dog has hot spots so they are allergic to grains!

Diagnosing canine food allergies is not easy. It typically requires a food trial during which a dog eats food containing protein and carbohydrate sources to which he has never been exposed before. Another option is to only allow your dog to eat food that has been processed in such a way as to make it hypoallergenic. A food trial needs to continue for at least eight weeks before its success or failure can be evaluated.   In a study of 278 cases of food allergies in dogs where the problem ingredient was clearly identified, beef was by far the biggest culprit (95 cases). Dairy was number two at 55 cases. Wheat came in third with 42 cases. Soy and corn were actually minimal offenders, coming in at 13 and 7 cases, respectively.

In fact, protein sources are more often to blame than grains.

So where is the answer to the itchy dry skin etc?  More often than not it can be traced back to a poor omega 6:3 ratio in the food formula.  Poor quality foods tend to be higher in grain or poor grain content which can contain great levels of omega 6’s.  Yet the downside to that is the omega 6’s are a natural inflammatory(10 -100 times more than Omega 3’s) that must be offset with the correct amount of omega 3’s which are a anti-inflammatory.  Often poor grade food formulas will be high in ingredients that naturally contain omega 6’s and are naturally low in Omega 3’s due to heightened cost of ingredients that contain Omega 3’s.

Plants that I would choose for myself  are better for my dog than grains.

We don’t have to study this one for long at all to find it is furthest from the truth.  Canines and Humans are somewhat biologically opposite.  What is good and intended for us as humans is not so in large amounts for dogs who are carnivores.  For example humans use carbohydrates for energy sources where as man’s best friend the dog uses fats for their main energy source and the list goes on and on.  Also don’t be fooled by the ingredient list on a grain free formula, or a grain included formula for that matter.  The blueberries, apples, carrots and other “could be”  high in antioxidant food ingredients are not the same quality that you picked up at the the supermarket for yourself yesterday. They are merely a by-product from the manufacturing of human grade foods, are generally of a lower grade and are included in very small, ineffective amounts.
In closing, we find that some of the popular reasons that people switch their companion animal  to a grain free diet do not hold much water and perhaps are not the best reasons for a change.  We also find that if switching to a grain free diet, educate yourself on the formula you are entrusting to fuel your pet and be certain that it is high in both animal sourced proteins and fats, as nature intended.  Not high in unusable grains or protein rich protein legumes.